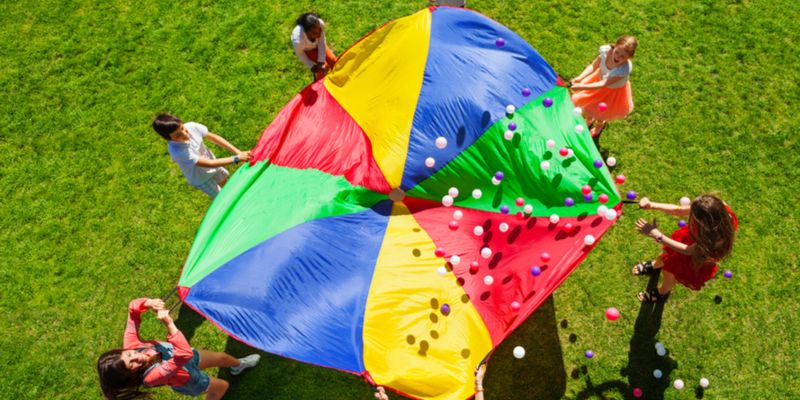 What can act as a tent, a balloon, and a toy trampoline all at once? A parachute! This classic play prop is a perennial favorite of children everywhere. Whether it’s bouncing balls off the rippling surface or ducking underneath it as it balloons above, parachutes offer a variety of ways to play and explore, all while keeping children active and entertained.

This versatility makes the parachute an ideal item for after school programs; the educational possibilities are endless, and parachute play encourages teamwork and social development too! Even better, the parachute can be the only prop you need! 3-2-1: Time for Parachute Fun by Clare Beswick offers teachers and program directors dozens of fun ideas for parachute games. Here are a few parachute activities to spark your students’ interest without the need for a bunch of extra materials.

Getting Started: The Wheels on the Bus

This basic activity shows children how to use the parachute. Children will be able to experiment with its motion as they move to the song “The Wheels on the Bus.”

Can You Guess How Many?

This simple activity will engage children’s math and spatial awareness skills as they predict how large the parachute is.

Children can pretend to be their favorite dinosaurs as they move and play with the parachute.