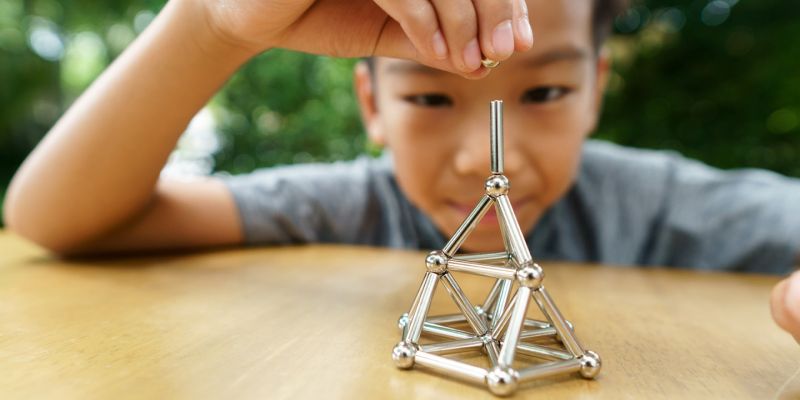 Playing with magnets is a safe and fun way to introduce students to physics. Simply put, magnetism is a force that attracts or repels magnetic objects. Magnets produce an invisible magnetic field and attract objects made of nickel, iron and cobalt. They also have two poles - the North Pole and the South Pole - and the opposite poles of two magnets always attract each other.

Even the earth is magnetic, as it is jam-packed with molten rocks rich in magnetic materials such as iron. Earth behaves as a giant magnet, causing the north pole of a magnet to point roughly toward its own north pole.

Are you ready to explore magnetic forces with your students? Try the simple activities below to get started:

Want to teach the basics of magnetism? Start by having students test to see which items or materials are magnetic and which ones are not. They can simply venture around the classroom to begin exploring. When testing two magnets, they can also identify their two poles (north and south) by observing whether the magnets attract or repel each other. To get started, check out this First Experiments Magnetism Set. It comes with a variety of magnets, including a super magnet, magnetic marbles, a horseshoe magnet and a compass magnet.

2. Make Your Own Compass

Before there were navigation systems and Google Maps, people would use a compass if they got lost or to find their destination. The metal needle in the compass points to “magnetic north,” as it aligns with the Earth’s magnetic field. When using a compass, first make sure the needle lines up with the north-south axis and you can easily determine which way you need to go (with the help of a map), whether it’s north, south, east or west.

You can make your own compass to observe how this magnetic tool works! To begin, you will need the following materials:

When you’ve created your simple compass, place it in a bowl of water, allowing it to float on the surface. Once floating in the water, Earth’s magnetic field (caused by the magnetic materials nickel and iron in the Earth’s core) pulls at the opposite poles of the needle and aligns it with the north-south axis.

Slime is all the rage these days, and magnetic slime is double the fun! To conduct this experiment, you will need the following items:

Magnetism is a cool phenomenon that students will love exploring! Try these activities to introduce them to the science - and fun - of magnetic forces.